An STLModel is a Model that's loaded from an STL file.

STLModel inherits these capabilities from its Group base class:

Load an STL file by creating an STLModel:

An STLModel prefixes its own ID to those of its components. The ID is optional, but in this example we're providing our own custom ID.

To bind a callback to be notified when the file has loaded (which fires immediately if already loaded):

You can also bind a callback to fire if loading fails:

To switch to a different STL file, you can dynamically update src:

That will apply whatever options were specified to the constructor.

If we have STL data in memory, then we can parse it directly into an existing STLModel instance using the static parse method:

That's asynchronous because STL is self-contained and does not need to load any external assets.

The following options may be specified when loading or parsing STL:

As mentioned above, providing a smoothNormals flag to the constructor gives our STLModel a smooth appearance. Triangles in STL are disjoint, where each triangle has its own separate vertex positions, normals and (optionally) colors. This means that you can have gaps between triangles. Normals for each triangle are perpendicular to the triangle's surface, which gives the model a faceted appearance by default.

The smoothNormals flag causes the STLModel to recalculate its normals, so that each normal's direction is the average of the orientations of the triangles adjacent to its vertex. When smoothing, each vertex normal is set to the average of the orientations of all other triangles that have a vertex at the same position, excluding those triangles whose direction deviates from the direction of the vertice's triangle by a threshold given in smoothNormalsAngleThreshold. This makes smoothing robust for hard edges, which you can see on the cylindrical objects in one of the examples: 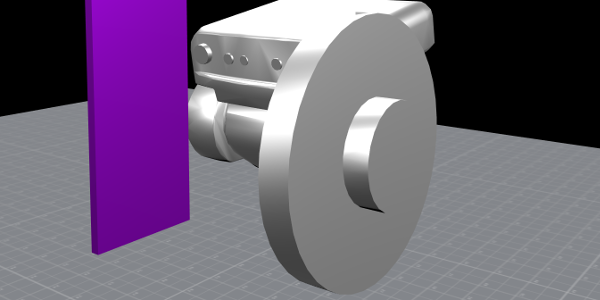 Note how the rim is smooth, yet the there is still a sharp edge adjacent to the flat portions.

Our STLModel will now be registered by ID on its Scene, so we can now find it like this:

That's assuming that we've created the STLModel in the default xeogl Scene, which we're doing in these examples.

We can also get all the STLModels in a Scene, using the Scene's types map:

Once the STLModel has loaded, its Scene will contain various components that represent the elements of the STL file. We'll now access some of those components by ID, to query and update them programmatically.

Let's highlight an Object in our STLModel:

An STLModel also has an ID map of the components within it. Let's highlight another Object via the STLModel:

An STLModel also has a map containing just the Objects:

An STLModel lets us transform its Meshes as a group:

We can also subscribe to changes to that boundary, which will happen whenever

Gets the angle between two vectors

Destroys all Components in this Model.

Convenience method for creating a Component within this Component's Scene.

The method is given a component configuration, like so:

Fires a destroyed event on this Component.

Logs an error for this component to the JavaScript console.

The console message will have this format: [ERROR] [<component type> =<component id>: <message>

Also fires the message as an error event on the parent Scene.

Fires an event on this component.

Notifies existing subscribers to the event, optionally retains the event to give to any subsequent notifications on the event as they are made.

Returns true if there are any subscribers to the given event on this component.

True if there are any subscribers to the given event on this component.

The type may be given as either a string or a component constructor.

This method works by walking up the inheritance type chain, which this component provides in property Component/superTypes:property, returning true as soon as one of the type strings in the chain matches the given type, of false if none match.

True if this component is of given type or is subclass of the given type.

Loads STL from a URL into a Model.

Logs a console debugging message for this component.

The console message will have this format: [LOG] [<component type> <component id>: <message>

Also fires the message as a log event on the parent Scene.

Cancels an event subscription that was previously made with Component#on() or Component#once().

Subscribes to an event on this component.

The callback is be called with this component as scope.

Handle to the subscription, which may be used to unsubscribe with {@link #off}.

Subscribes to the next occurrence of the given event, then un-subscribes as soon as the event is subIdd.

Parses STL into a Model.

Removes the given child.

Inherited from Object but overwritten in /home/lindsay/xeolabs/xeogl-next/xeogl/src/objects/object.js:928

Rotates about the given local axis by the given increment.

Rotates about the local X-axis by the given increment.

Rotates about the local Y-axis by the given increment.

Rotates about the local Z-axis by the given increment.

Inherited from Model but overwritten in /home/lindsay/xeolabs/xeogl-next/xeogl/src/math/math.js:1747

Efficiently post-concatenates a scaling to the given matrix.

Translates along local space vector by the given increment.

Inherited from Object but overwritten in /home/lindsay/xeolabs/xeogl-next/xeogl/src/objects/object.js:1014

Translates along the local X-axis by the given increment.

Logs a warning for this component to the JavaScript console.

The console message will have this format: [WARN] [<component type> =<component id>: <message>

Also fires the message as a warn event on the parent Scene.

Child Objects mapped to their IDs.

Clipping is done by the Scene's Clips component.

Indicates if included in boundary calculations.

All contained Components, mapped to their IDs.

Indicates if culled from view.

Only rendered when visible is true and culled is false.

True as soon as this Component has been destroyed

Indicates if edges are emphasized.

Objects in this Model that have entity types, mapped to their IDs.

Each Object is registered in this map when its entityType is set to value.

Convenience array of IDs in entities.

Optional entity classification when using within a semantic data model.

See the Object documentation on "Applying a semantic data model" for usage.

Inherited from Model but overwritten in /home/lindsay/xeolabs/xeogl-next/xeogl/src/models/model.js:281

Each Object is registered in this map when its entityType is assigned a value.

Each ghosted Object is registered in its Scene's ghostedEntities map while its entityType is set to a value.

This is unique not only within the Scene, but throughout the entire universe.

Only defined when given to the constructor.

Objects in this Model that have GUIDs, mapped to their GUIDs.

Each Object is registered in this map when its guid is assigned a value.

Each highlighted Object is registered in its Scene's highlightedEntities map while its entityType is set to a value.

Unique ID for this Component within its parent Scene.

All contained Meshes, mapped to their IDs.

Arbitrary, user-defined metadata on this component.

The Model which contains this Component, if any.

Will be null if this Component is not in a Model.

All contained Objects, mapped to their IDs.

The parent Group may also be set by passing the Object to the Group/Model's Group/addChild:method method.

Whether or not to allow picking.

Picking is done via calls to Scene#pick().

The number of degrees in a radian.

Local rotation, as Euler angles given in degrees, for each of the X, Y and Z axis.

The parent Scene that contains this Component.

Each selected Object is registered in its Scene's selectedEntities map while its entityType is set to a value.

Path to an STL file.

You can set this to a new file path at any time (except while loading), which will cause the STLModel to load components from the new file (after first destroying any components loaded from a previous file path).

Fires a loaded event when the STL has loaded.

Inherited from Component but overwritten in /home/lindsay/xeolabs/xeogl-next/xeogl/src/models/model.js:55

JavaScript class name for this Component.

A map of maps; for each contained Component type, a map to IDs to Component instances, eg.

Only rendered when visible is true and culled is false.

Each visible Object is registered in its Scene's visibleEntities map while its entityType is set to a value.

Fired when this Component is destroyed.

Fired whenever this STLModel fails to load the STL file specified by src.

Fired whenever this STLModel has finished loading components from the STL file specified by src.